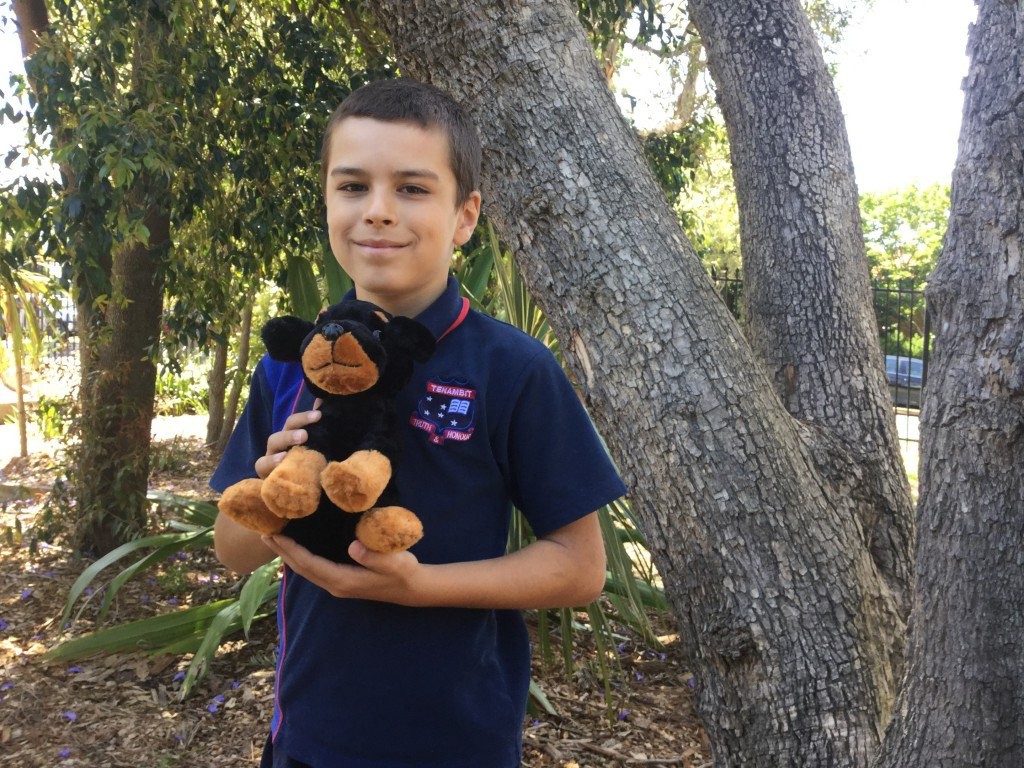 Dear Diary,
Tonight me and Leo read Little Red Riding Hood. I really liked it because of the wolf. It kind of scared me until I realised it was a person dressed up as a wolf. Could you please dress me up as one on Halloween please?
Well got to go to bed. Bye!
Yours sincerely, BD 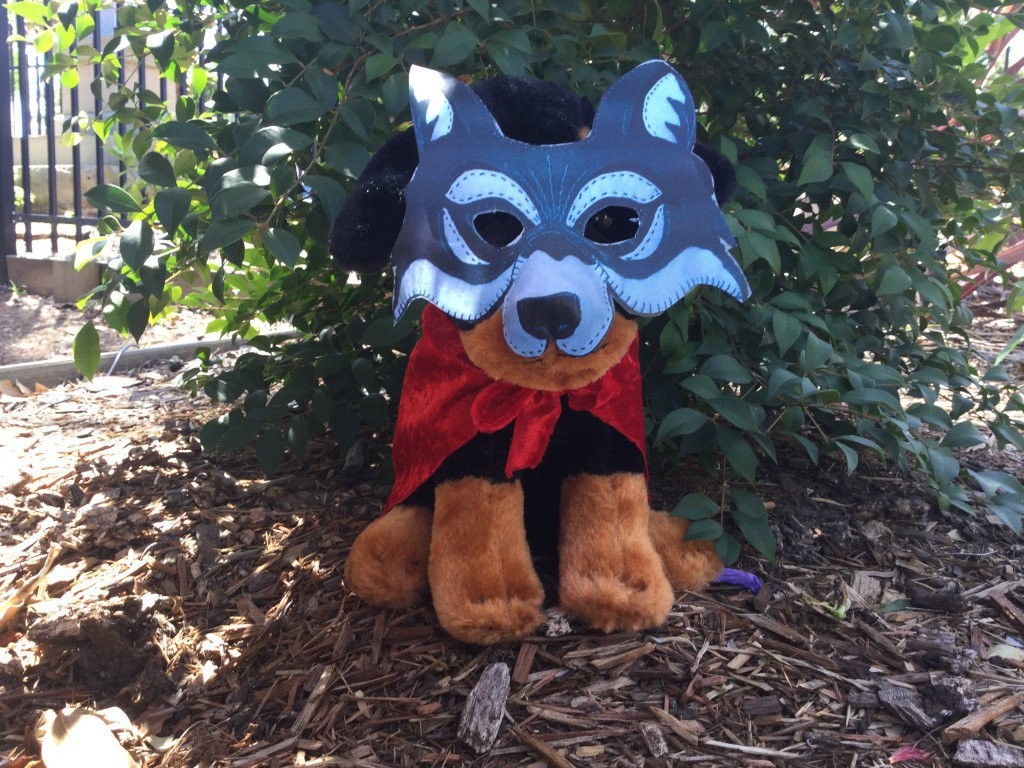 Today its Saturday and Leo took me on his bike to show me some tricks, bunny hop, wheelie, side line and other tricks. Leo’s bike is a mountain bike called the NR 20. After that he introduced me to his friend Michael, Dillon and his BFF Brayden. It was really fun!
Yours sincerely, BD

Flood by Jackie French and Bruce Whatley has certainly become a favourite of both teachers and students at Tenambit Public school. It has been the subject of many book reviews and most recently has been the inspiration for some beautiful artwork by 4G. Students were then asked to select their favourite painting and critique it. I have posted a  number of the critiques and artworks by the very talented and creative students in 4G. 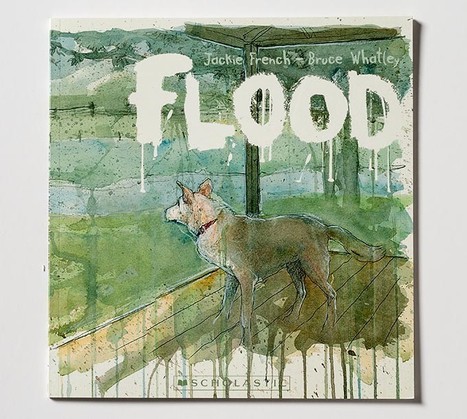 Please take a look at the following posts and feel free to leave them a comment. I’m sure the students would appreciate your words of encouragement. 😊 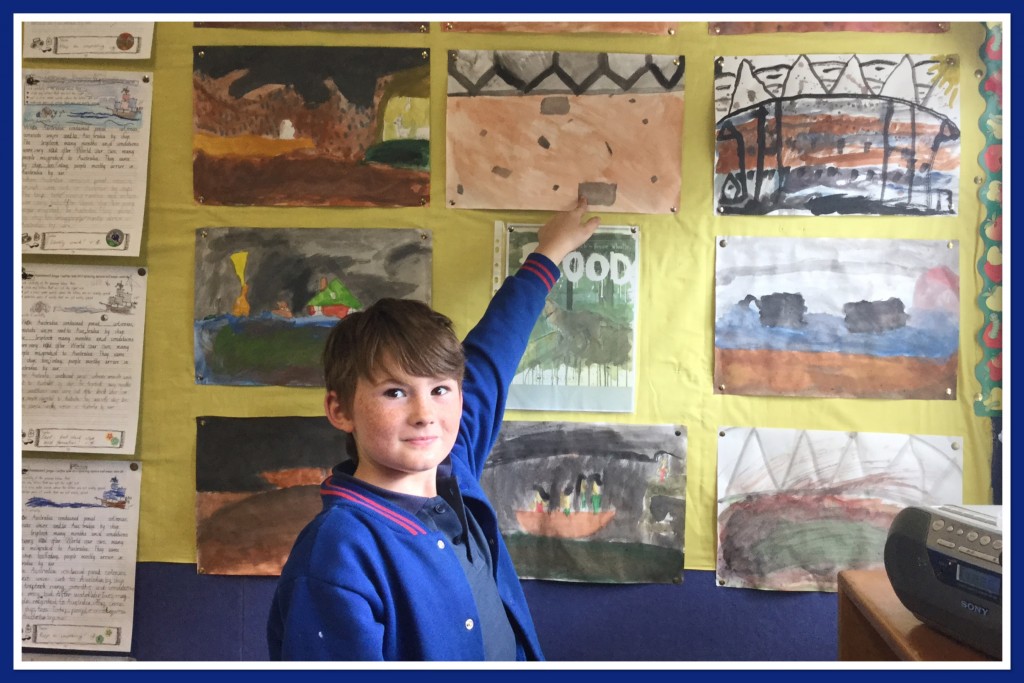 I like the way that every artwork  is  all dark and muddy and the sky is all cloudy and they fit that texture. I also like that every picture has a different flood scene and all the houses and bridges are getting caught and pushed through the flood.

My favourite is the one with the bridge with parts falling off it and it just looks really nice with that water too. No 5. 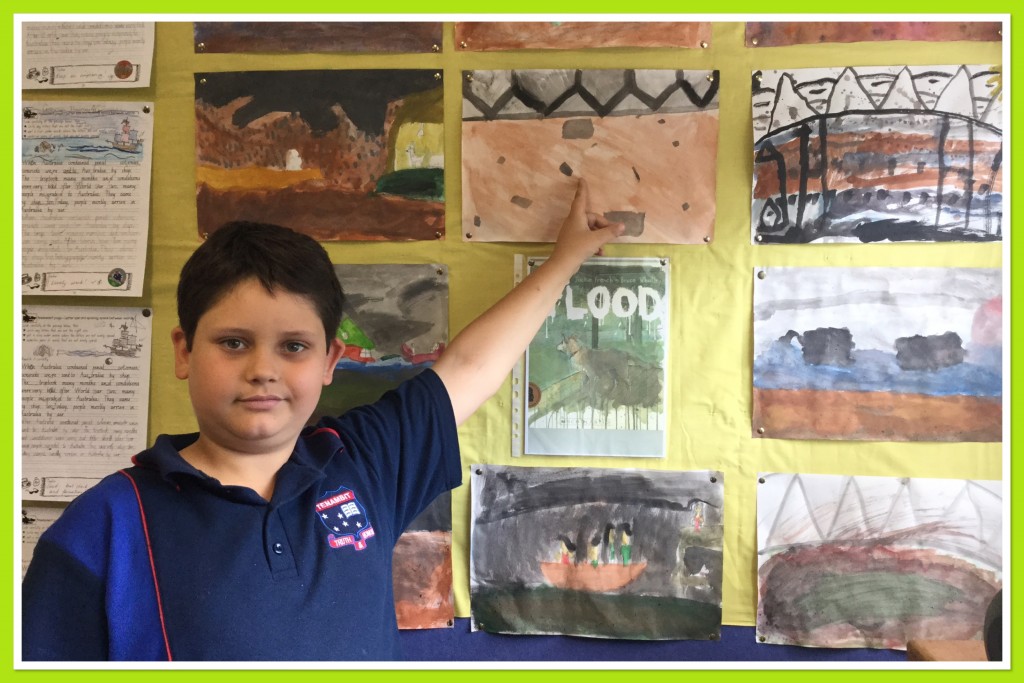 I like that number 5 has bits and pieces going under the bridge like the part of the café, and the tugboat.

I like the way that person did the colours too because it looks like a flood from a bird’s eye view.

I like how the person did the bridge and it kind of looks like sharks top teeth which looks cool. 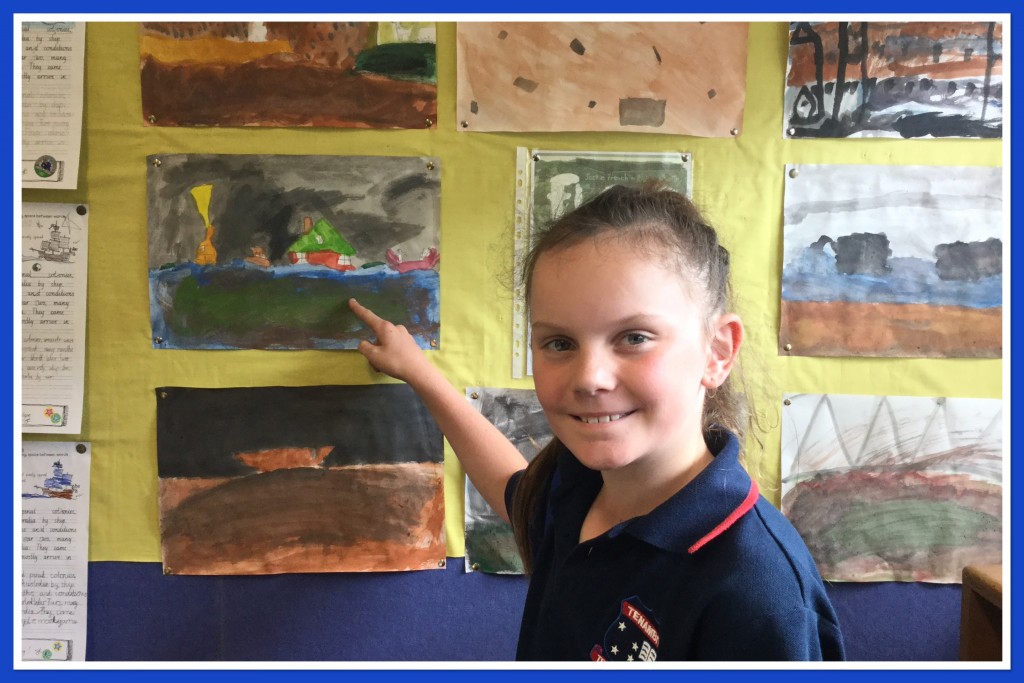 I like the way in painting number 7 that it has high water with a bit of brown and green to make it look disgusting.

I also like painting 7 because it shows big grey clouds are moving with the wind. It has different shades of grey and a little bit of black. It shows that people are on the roof because of how dirty and high the water is and I see people in a boat going through the flood trying to get out of the flood, trying to escape and live somewhere higher. 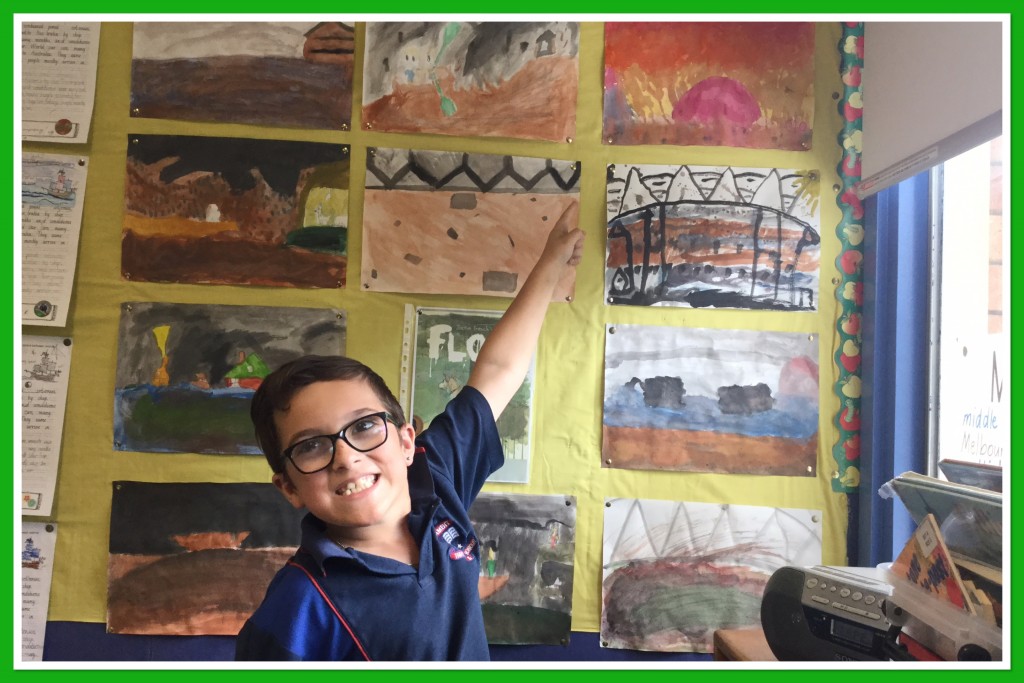 I like how number 3 made it so it is dripping. It looks so realistic, it’s unreal! I also like that number 3 didn’t go with the dull colours and went different! But I think that the best thing is how number 3 shows rubbish in the polluted water. Number 3 really shows that polluted water! The whole thing is just great! 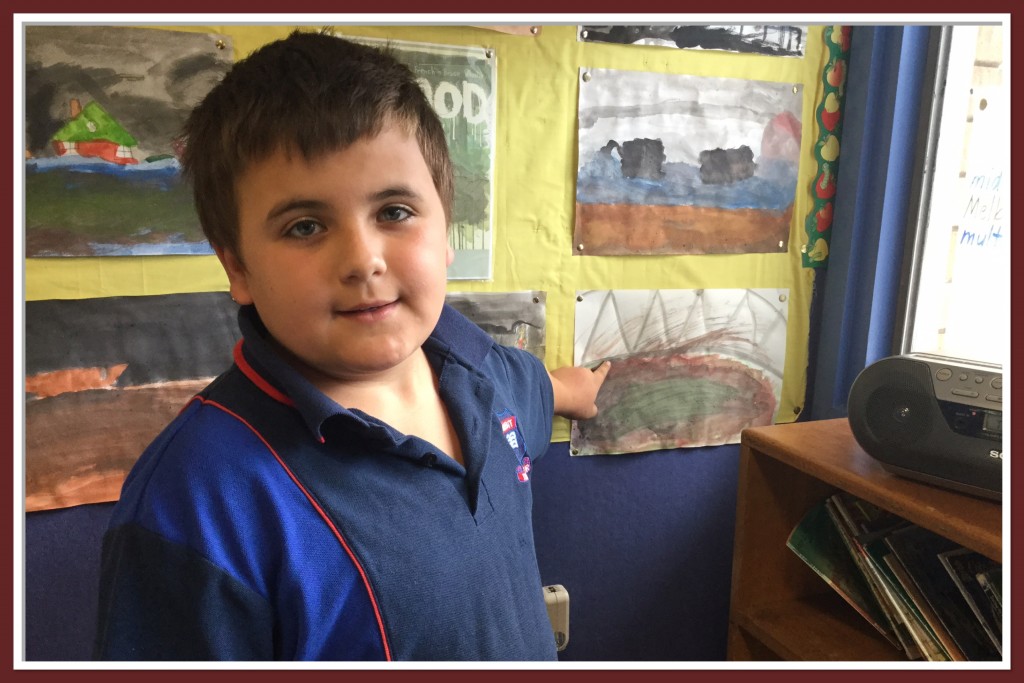 I really hope that Noah will carry on with his art so he can be famous when he grows up, I really hope he will. You will be a good artist Noah if you keep carrying on with art. Don’t stop Noah. Really, don’t stop. 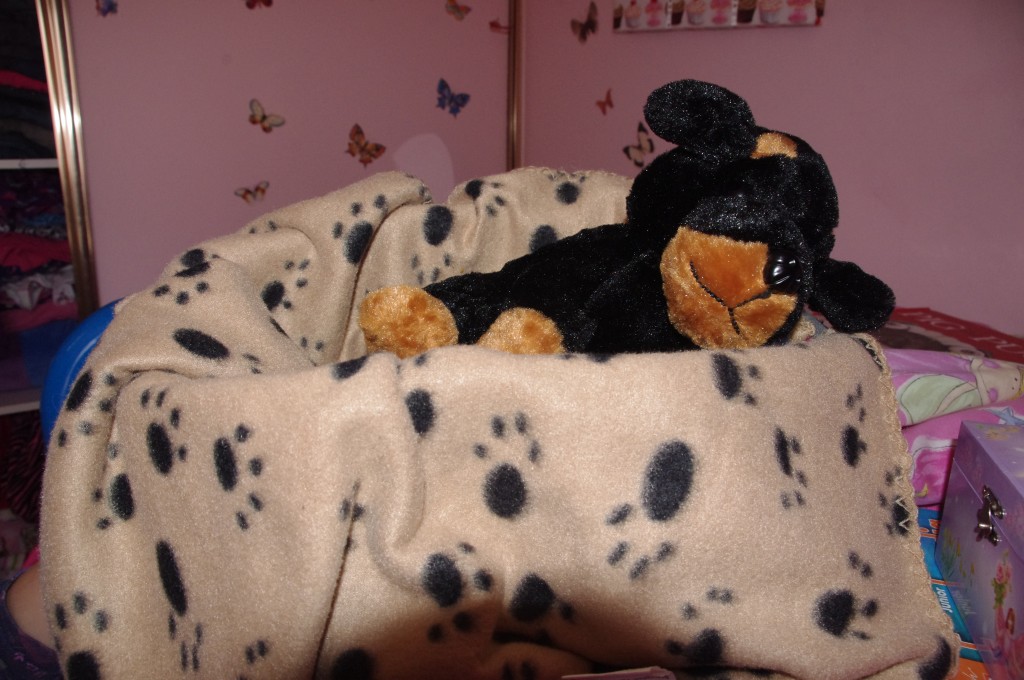 Today I went home with Alison. She taught me how to do more tricks, we read a book and had a bath. We watched TV then had dinner. I got a tasty bone and some water. We watched TV for a bit longer, had dessert and went to bed. Alison read me Pig the Pug. That is my favourite book. Looking forward to more fun tomorrow.

Dear Diary,
Today Alison had to go to school so I stayed at her house. Before she went I played with her. When she was gone I talked to her teddy bear then went to sleep. When I woke up Alison was rocking me in her arms and she gave me dinner, we watched TV, then went to bed. 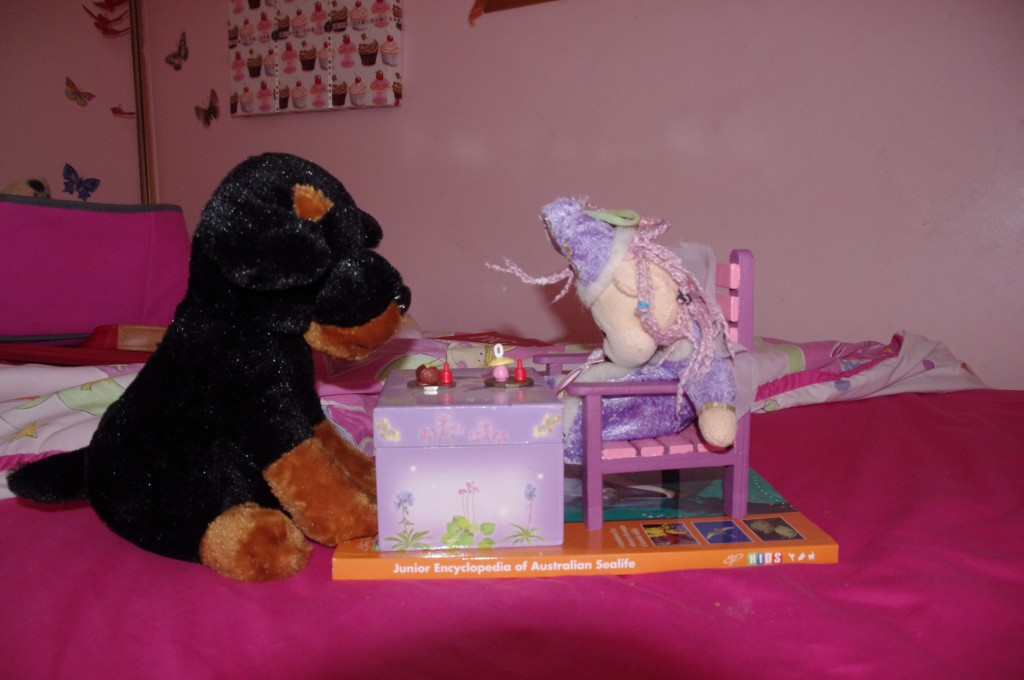 Today I woke up, had breakfast, then played with Alison. She had to go somewhere with her dad so her sister Olivia looked after me. She read my book and then taught me a new trick. I was a bit tired so I went to sleep. When I woke up Alison was home. She lifted me out of my bed and we played until dinner. I had a dinner date with her teddy.

Dear Diary,
Today Alison had to help clean her great nan’s house and she took me. On the way we saw some motorbikes. They were so cool! When we got there we went to explore. We found a nest that was made of grass and lots of blue stuff, even a blue toy truck. The backyard was really big and had lots of trees, an old tool shed and garden shed. After exploring I had lunch and went to sleep. After I woke up we went home, had dinner and Alison and I did  some blogging. It was a great weekend! I wonder who will take me home next weekend? 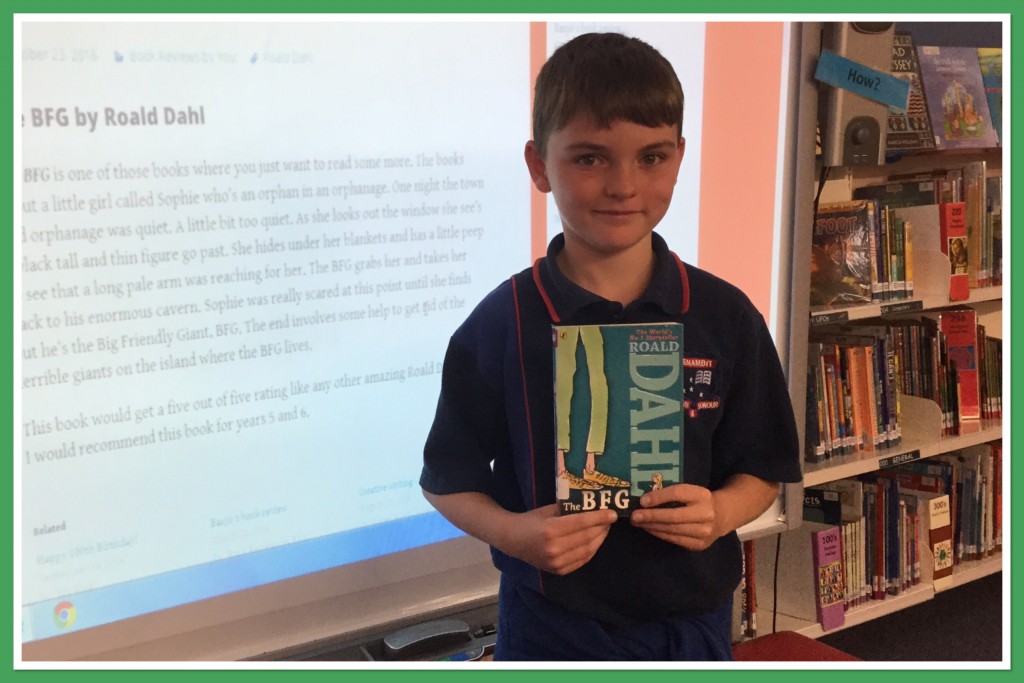 The BFG by Roald Dahl

The BFG is one of those books where you just want to read some more. The books about a little girl called Sophie who’s an orphan in an orphanage. One night the town and orphanage was quiet. A little bit too quiet. As she looks out the window she see’s a black tall and thin figure go past. She hides under her blankets and has a little peep to see that a long pale arm was reaching for her. The BFG grabs her and takes her back to his enormous cavern. Sophie was really scared at this point until she finds out he’s the Big Friendly Giant, BFG. The end involves some help to get rid of the terrible giants on the island where the BFG lives.

This book would get a five out of five rating like any other amazing Roald Dahl books. I would recommend this book for years 5 and 6. 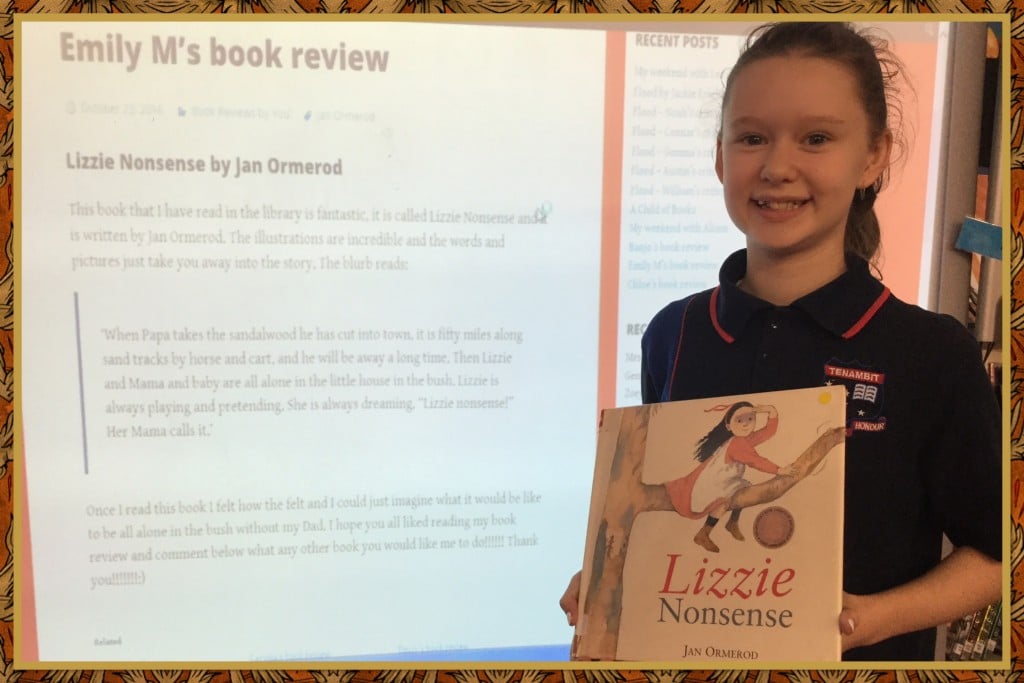 This book that I have read in the library is fantastic, it is called Lizzie Nonsense and it is written by Jan Ormerod. The illustrations are incredible and the words and pictures just take you away into the story. The blurb reads:

‘When Papa takes the sandalwood he has cut into town, it is fifty miles along sand tracks by horse and cart, and he will be away a long time. Then Lizzie and Mama and baby are all alone in the little house in the bush. Lizzie is always playing and pretending. She is always dreaming. “Lizzie nonsense!” Her Mama calls it.’

Once I read this book I felt how she felt and I could just imagine what it would be like to be all alone in the bush without my Dad. I hope you all liked reading my book review and comment below what any other book you would like me to do!!!!!! Thank you!!!!!!!:) 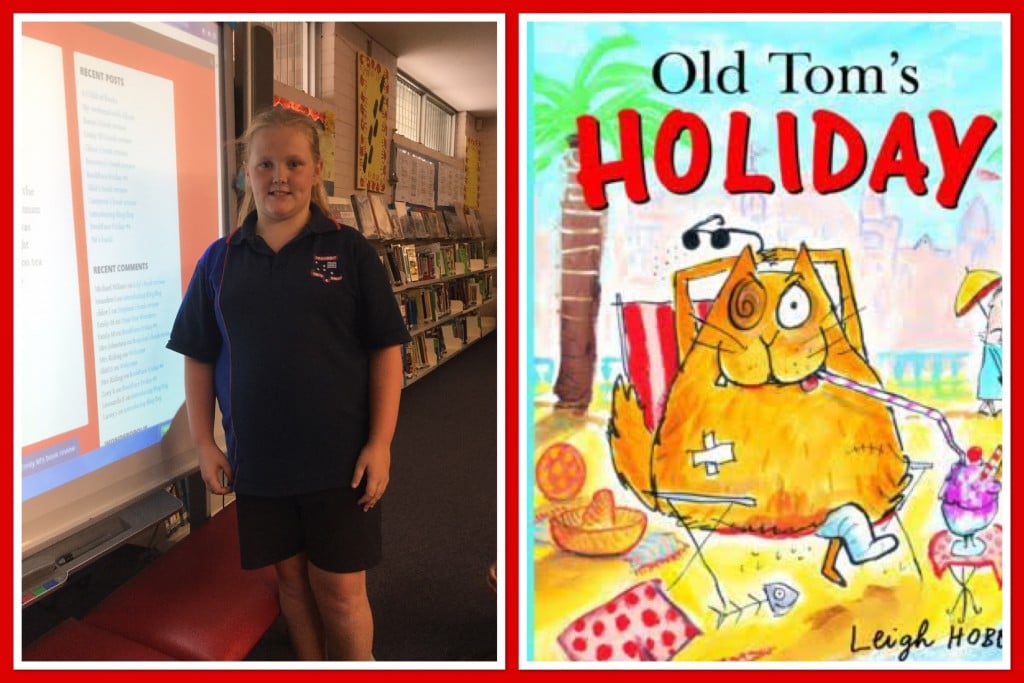 Today we venture from the gallery, to the catwalks of Milan, to the vast and beautiful Australian outback. Can you guess the teachers behind these books? 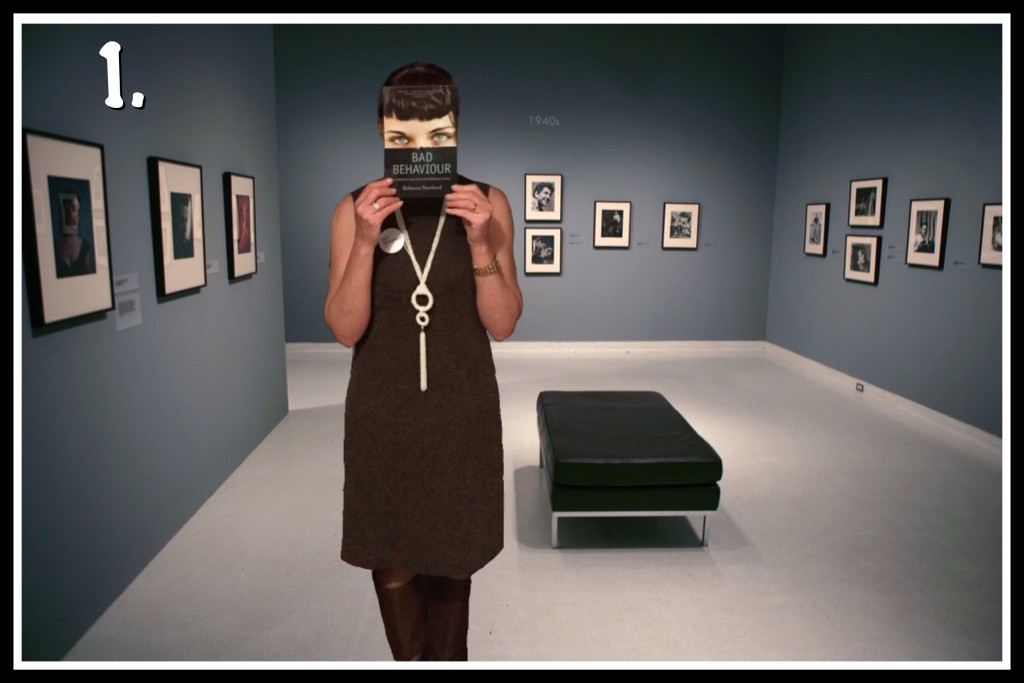 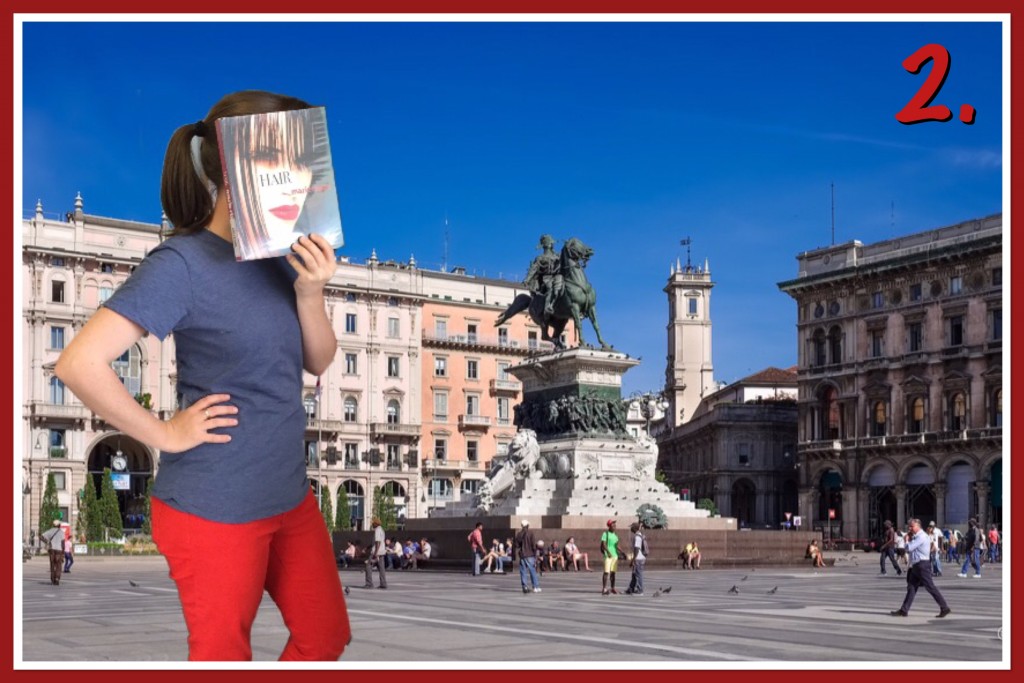 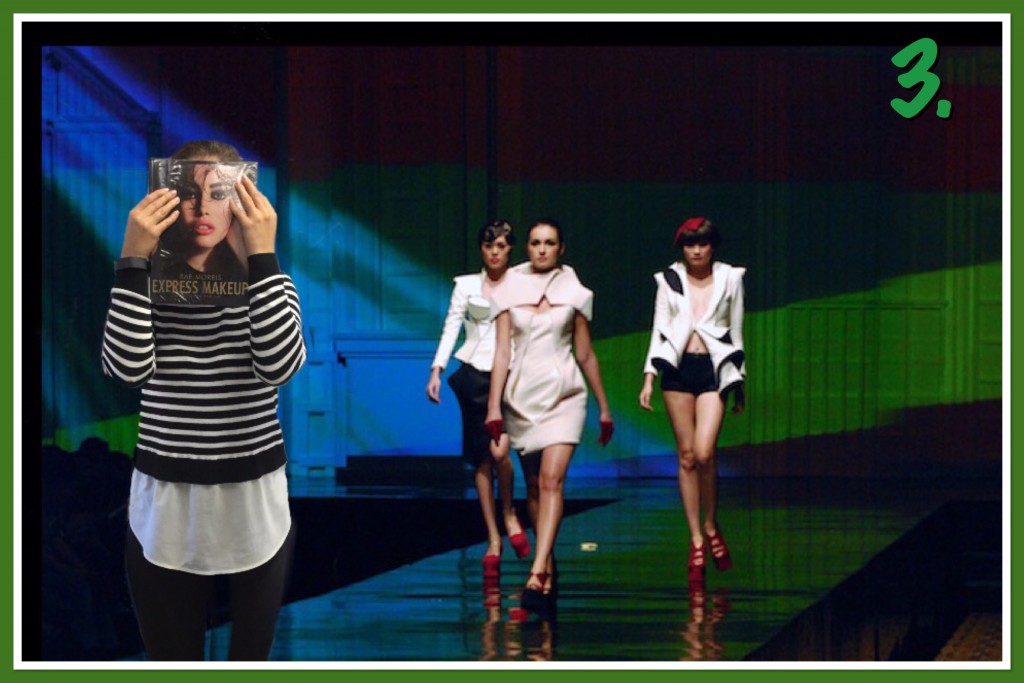 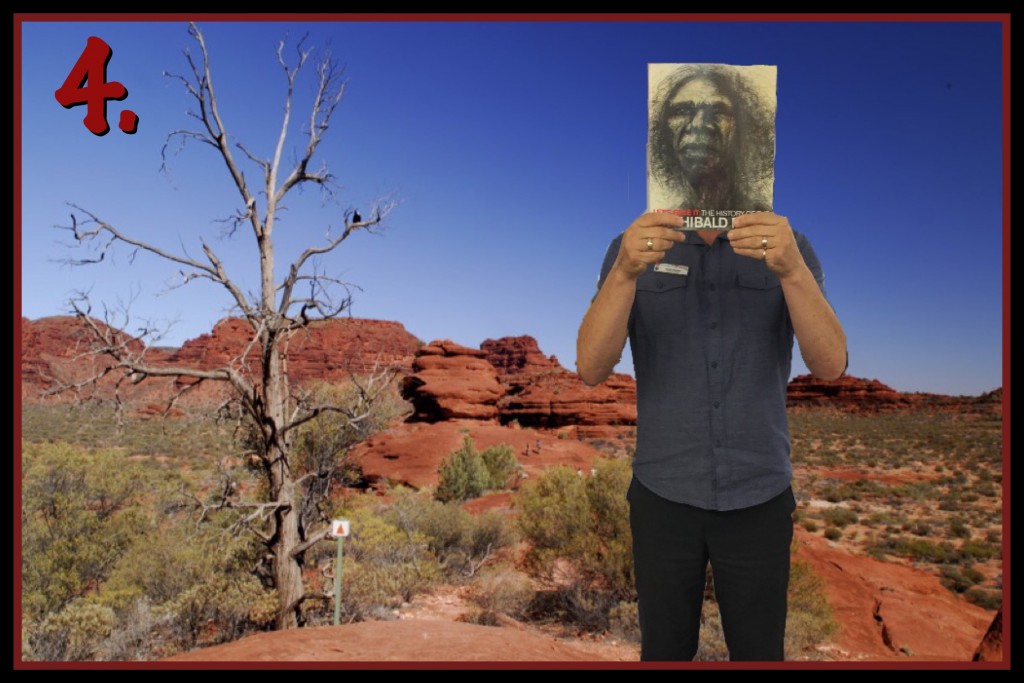 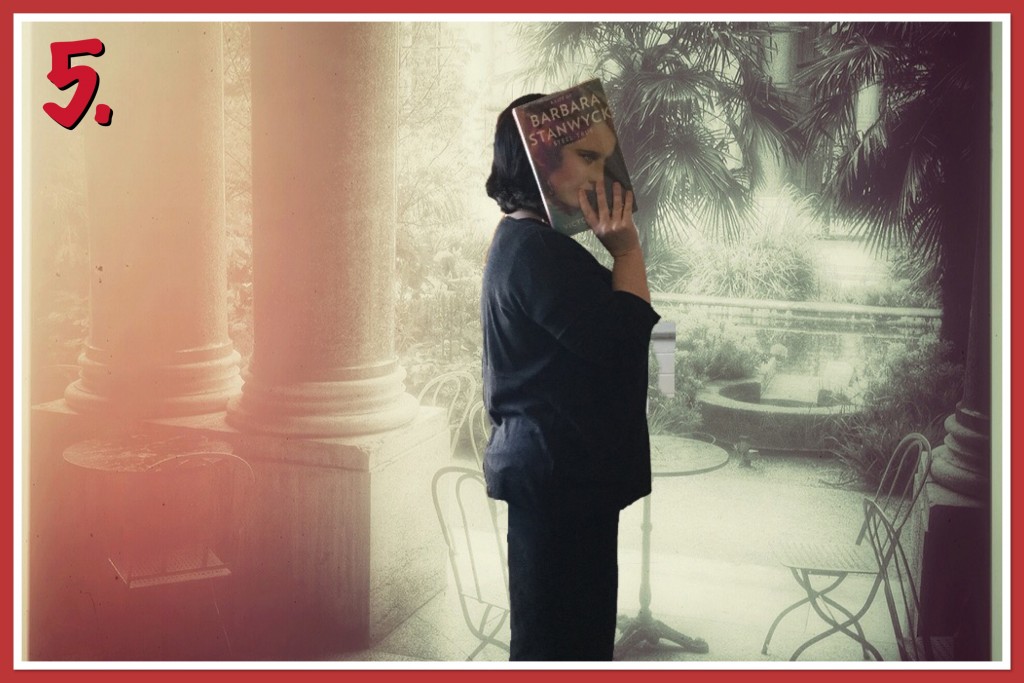 Did you guess correctly? I hope you’ve enjoyed BookFace Friday. I know I’ve had fun creating it for you. 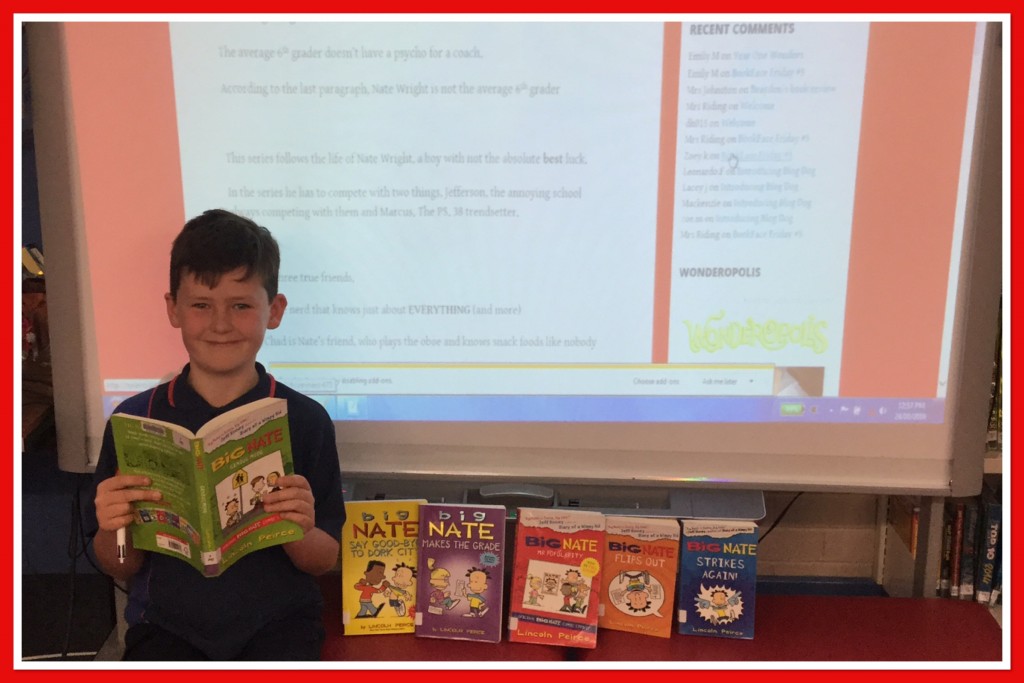 The average 6th grader can do their homework WITHOUT cartooning all over it.

The average 6th grader doesn’t have a Satan look-alike as a social studies teacher.

The average 6th grader doesn’t have a psycho for a coach.

According to the last paragraph, Nate Wright is not the average 6th grader

This series follows the life of Nate Wright, a boy with not the absolute best luck.

In the series he has to compete with two things, Jefferson, the annoying school always competing with them and Marcus, The PS. 38 trendsetter.

Francis, the nerd that knows just about EVERYTHING (and more)

Chad, Chad is Nate’s friend, who plays the oboe and knows snack foods like nobody else

And Teddy, the boy who finds Nate just weird a touch, but, is still friends with him.

Then there’s Gina who gets A + for Annoying (A) and more (+) She’s an absolute pain to everyone, but Mrs Godzilla frey.

In this series, there are nine books, which means 9 times the fun!

I loved this series for its humour and comedy, but also the life-true references such as; Antique Roadshow, Al’s Auto Glass and Krazy Kone.

The great thing about this series is, you can read it over again and it’s still great.

The only part I didn’t like was the setting, America!

This series is great and 100% recommended to any kids who love Diary of a Wimpy Kid! 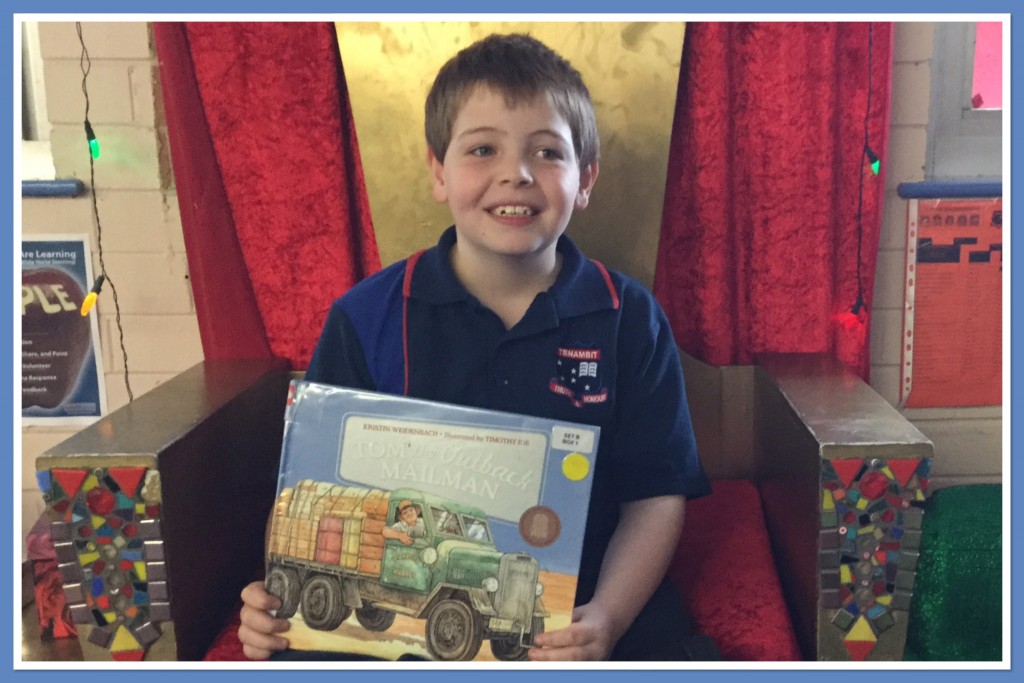 Big Tom Kruse had to deliver mail in the outback but it started to rain and his truck couldn’t cross the river. He hired a boat and went back and forth loading up another truck until the job was done.

I liked Tom the Outback Mailman because it is a true story about the Australian outback. Tom is very clever because he solves problems on his mail run.

I would recommend this book for children from k to 6.